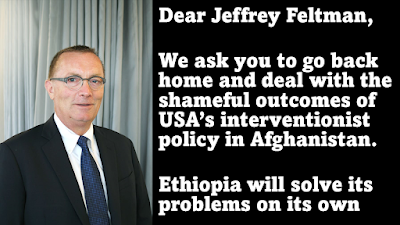 On Friday 29th January 2021, The Middle East Policy Council held its 103rd Capitol Hill Conference virtually. One of the speakers of the event was Ambassador Jeffrey Feltman, Special Envoy for the Horn of Africa.

Although the event was about the Middle East, Feltman wanted to start with what he referred as ’ the alarming developments in the Horn of Africa’ as he is convinced that there is a very strong connection between the Horn and the Middle East. Agree with him on the connection.

Feltman thus discusses Ethiopia. He says, “Ethiopia's population alone is more than 4 times that of pre-war Syria. 110 million people in Ethiopia. Conflict in the Horn could make Syria look like child's play by comparison.”

We disagree. Ethiopia & Syria are totally different. We disagree because Syria has been led ONLY by the al-Assad family since 1971 with an iron fist whereas Ethiopia is being led by a new and dynamic leader, who only took power in 2018. Furthermore the conflicts in the two countries are completely different in nature.

In Syria it was public uprising as part of the Arab Spring, whereas in Ethiopia it is a disgruntled group wanting to take power by force against the will of the majority of the Ethiopian people. Syria’s president has been extending his term, which is not the case in Ethiopia.

Feltman continues. He says, “We need to engage the gulf countries Egypt and Turkey to stabilize the Horn of Africa.”

Here Feltman accuses the Ethiopian government as if it started the war. He shifts the blame from TPLF to ENDF. This is dangerous & misleading statement.

Feltman continues his analysis of Ethiopia. He says, “Ethiopia's Oromo region is restive”

Disagree again. Feltman does not know and cannot know how the majority Oromos and the Oromia region feel and operate. Does he know that nearly 15 million people voted for the PM's party in Oromia?

Feltman continues. He says, “ Ethiopia’s Elections scheduled in 2021 of this year are likely to provoke violence.”

We disagree again. Does he know that nearly 34 million voted without a single violence? Does he accept the results of Ethiopia's historic democratic election?

This is an absurd accusation. Ethiopia is the only country that has been keen to see African solutions for African problems unlike Egypt & Sudan, who pushed the #GERD issue to Arab League and UN.

Feltman says, “IGAD, the intergovernmental Authority on Development has been severely weakened as authoritarian leaders in Ethiopia, Eritrea and Somalia draw closer at the expense of the wider collective.”

We disagree again. Labelling leaders as authoritarian because they don’t agree with you is unacceptable.

Feltman continues his wrong and biased analysis on Ethiopia, the Horn and wider Africa. He concludes that Horn of Africa cannot sort its crises on its own and needs support from the Gulf and Arab states.

As Feltman was on his way to meet Ethiopia’s leaders, which took place on 17th August, Ethiopians across the world resorted to social media to tell him and the Biden Administration that Feltman was not welcome as he had already lost credibility.

During his talks with Deputy Prime Minister and Froegin Minister of Ethiopia, he was told that ‘Ethiopia expects that the U.S. would properly condemn the destructive acts of the invading TPLF forces. Feltman said the U.S. understands how the people of Ethiopia see TPLF.’

DPM & FM, H.E. @DemekeHasen, meets #US Special Envoy for the Horn of Africa, Mr. Jeffrey Feltman & said #Ethiopia expects that the U.S. would properly condemn the destructive acts of the invading TPLF forces. Feltman said the U.S. understands how the people of Ethiopia see TPLF. pic.twitter.com/X67plAfL03

So good that Ethiopians rejected him as he has no credibility at all.

Full video of the August 29th event in the below link.

Bekele Woyecha
I was born and raised in Addis Ababa, Ethiopia; a country dubbed to be the cradle of mankind. I live in London, one of the greatest and cosmopolitan cities in the world. I love this amazing city. I also have seen beautiful cities in Africa, Europe, and North America. Thanking God for these great experiences in life. Professional wise, I am a Director of an organisation with extensive Community Organising experience. My job brings me in touch with people from across the world who relentlessly work hard to bring the kingdom of heaven on earth. People ready to change the world from ‘as it is’ to ‘as it should be’. I am concerned about the global refugee crisis. Many people across the world are persecuted for their religion, race, political belief, sexual orientation, and other reasons. It is disheartening to see fellow humans denied the right to a decent life. I hate it when some abuse others using their POWER. I also hate it when leaders cling onto power by force. Hence defending human rights is more than important for me. It is down to my generation to identify, train and coach the next generation of leaders and empower them with hope and love. The next generation deserves better.
Older Post Home

On Friday 29th January 2021, The Middle East Policy Council held its 103rd Capitol Hill Conference virtually. One of the speakers of the eve...