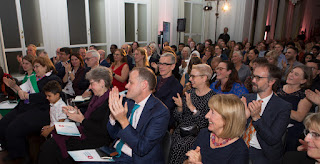 Celebrating Community Sponsorship of Refugees is celebrating community sponsors and their sponsored families; it is celebrating all those involved in the scheme; it is about celebrating all things Community Sponsorship encompasses. That is why I love this great scheme and want to see it flourish not only in the UK, but across the globe. That it is not the only reason for my love for the scheme. For me, it gives me chance to pay back and be amongst those who welcome newcomers. I am someone who once was seeking sanctuary, now working with many people around the United Kingdom to welcome newcomers.

I once was an asylum seeker, a detainee, a number in a detention centre in London, a refugee and now a British and global citizen. I have seen the good and the bad of the Immigration System. But there is something special in Community Sponsorship of Refugees. It is a scheme that gives both newcomers and sponsors equal voices; it is a partnership of equals; a scheme delivered in a friendly and relational way; not like a client- service provider type.

As someone who has been involved in Community Sponsorship for a while, I have had chance to meet the heroines and heroes of the scheme. Folks keen to do their bits to welcome newcomers. Newcomers working hard to rebuild their lives, integrate and become self-sufficient. Newcomers with big dreams and aspirations. Sponsors that are very creative and always ready to go extra mile to make a difference. Many of these great sponsors did not have experience of refugee resettlement in the past but have been exceeding expectations. As my good friend and one of the great champions of Community Sponsorship, Nick Coke says, “We may not be experts in refugee resettlement, but we are experts in our communities”. 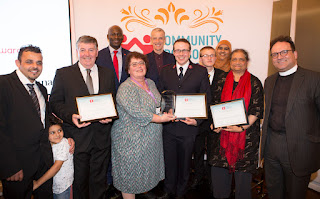 8th October 2019 has a great place in the history of Community Sponsorship in the United Kingdom and globally. Sponsor Refugees, where I am a part of,  was able to bring together champions of the scheme from across the United Kingdom, North America, Ireland and Switzerland for the 2nd Community Sponsorship Awards ceremony which was hosted by prominent BBC personality and community sponsor – Claudia Hammond and Hani Arnaout, originally from Syria and resettled through Community Sponsorship, now living in Devon. Hani and his family are inspirational. It is a family that strives to succeed and fun to be around. Another newcomer highly involved in the ceremony was Falak Batak from Narberth, Wales. Falak was one of the winners of the 2018 awards and this year she had the role of presenting an award. Falak aspires to be an interior designer and promotes the scheme whenever possible. 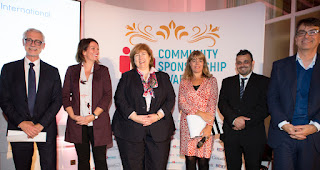 The fact that this year’s awards ceremony took place at the spectacular Canada House was so fitting for Canada’s long standing tradition of welcome. After all Canada has introduced refugee sponsorship to the world and has always been on hand to extend expertise and support. So good to have had Canada’s Deputy Immigration Minister, Ms. Catrina Tapley, with us as the guest of honor. Canada’s High Commissioner to the UK, Her Excellency Janice Charette, welcomed guests to Canada house and said, “ It’s my pleasure to have Canada House host the Community Sponsorship Awards this year, to celebrate your collective and individual achievements in building and expanding the Community Sponsorship Scheme here in the UK.”

Among the awards presenters was prominent British actor Peter Capaldi whom many people know for his roles in Telly. Peter’s role as Doctor Who and Malcolm Tucker in The Thick of It is widely known. Peter was among the audience not as a telly man, rather as one of those involved in Community Sponsorship locally in Muswell Hill, North London. Here is Peter’s full speech.

October 8 was about recognition and celebration, but also a reminder that the refugee crisis is still there, and it is even worse today than it was in 2015 that needs our collective efforts. It is a reminder that we need to diversify the scheme, engage not only individuals and charities, but also do more outreach works to bring Businesses, Universities, Schools and others who might be interested to welcome and integrate newcomers. An opportunity to take stock and challenge self.