Behind the success story are the inspirational leaders

Ethiopians and British citizens of Ethiopian origin gathered at the Ethiopian Community in Britain which is located in Finchley, North London on February 4th for a spectacular event that brought together folks of different ages, experiences and talents. This event was a success by all standards. The food, drinks, music and venue may be similar and what we are often used to seeing at Ethiopian events. 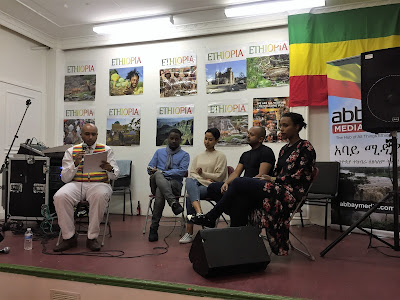 But the February 4th event was one that transcended generations; that was unique in nature; that was well organised and started almost on time (unlike many Ethiopian events); that was led mostly by young leaders. One of the most intriguing moments was interview conducted by Ermias Kebede where he brought 4 youngsters who were born either in Ethiopia or outside Ethiopia and now living in the United Kingdom. The question on identity and why it matters was even more entertaining and equally challenging. It was also a very good opportunity to hear some wonderful stories of self - that turning points in the lives of those interviewed; moments when folks had challenges; their actions or inactions and what happened afterwards. It was simply moving.


Another great success story of the day was not only its being orderly, to the point and also participatory, but also brought in the unusual suspects into action. Even more, it brought many out of their comfort zones and helped them to be part of the flawless event. This was an amazing event that exceeded expectations of many. The only challenge is whether the organisers could do it again and whether they would be able to beat the high bar they have already set.


I am hopeful that the board of the Ethiopian community in Britain will bring us together in the not too distant future and that it keeps delivering and exceeding.


Kudos to the organisers of the event and all who supported.
By Bekele Woyecha on February 14, 2018