My experience reporting in Ethiopia: from the democratization process to the drought crisis 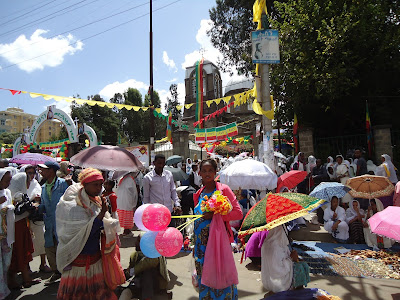 Addis Ababa is a colorful city sinking beneath the mountains into a valley of high-rise buildings under construction, clashing with slums and children grazing goats and lambs while cars wallpapered with pictures of the Virgin Mary roar around and pop up from everywhere. In the ochre and dusty city of Addis the crazy chaos seems to have its own meaningful order of things.
There is a positive energy in this city which overwhelms you with its warm colors - red, yellow, orange and pink stand out in every street - along with Christian and Muslim morning prayers and the aroma of freshly ground coffee. Three weeks after my return from Ethiopia, I can say that being there was an incredible work and life experience for me.

I travelled to Ethiopia with the organization I work for, the International Observatory of Human Rights, on 27th April to tell the story of a country which is undertaking a huge democratization process. We were all very glad that we were able to participate somehow in this change: my colleagues and I finally managed to tell a positive human rights story.  For journalists, human rights stories are rarely happy ones. Only a year ago, Ethiopia was one of the biggest jailers of journalists in the world. It was only when Dr. Abiy Ahmed took office in April 2018, that democratic reforms were issued, journalists were released from prison, private media were able to operate in the country and “thorny” websites were unblocked. 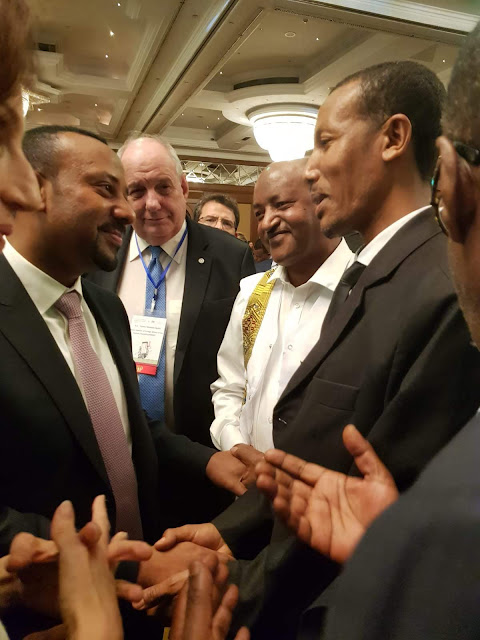 Democratic change within a country always takes time, so before leaving England I was a bit skeptical. Once in Ethiopia, I found the strength of its people who are trying to do good and better for their country. Although the government still has many challenges to face - ethnic division is just one of them - I could feel a new positive vibe. While covering the giant steps that Abiy’s administration has made, for IOHR TV, we met Ethiopian journalists, bloggers and people who lived in exile for many years, like EILCO’s founders. Despite what they went through, they now want to share their own experience and make this democratic change not only possible, but also felt by the rest of the population. The most powerful freeze-frame I’ve brought back home is the emotions in the eyes of people like Bekele Woyecha and journalist Woubshet Taye when meeting the Prime Minister at the World Press Freedom Day dinner gala. I can’t even imagine how it must have felt when the new Prime Minister of your homeland, a country you were not allowed to enter for many years, tells you: “Welcome home. We need you”.

As a journalist myself, it was a privilege to meet someone like Woubshet Taye, who unjustly spent seven years in jail for his critical coverage of the government. When I asked him who he is today, he said that he is nobody, just someone who is trying to do his job. His answer really made me realize that freedom of expression in the Western world is often taken for granted by journalists themselves. We need to do more to support the challenges and struggles that our colleagues face in developing countries and dictatorships. Campaigns to protect journalists worldwide are, in fact, a quite recent phenomenon. Pressure means a lot for them. Look at the case of Reuters' journalists in Myanmar. The international pressure was significant in this case. Back in Addis we interviewed the brother of Reuters' journalist Wa Lone, who was imprisoned in Myanmar. A few days after World Press Freedom Day in Ethiopia, Wa Lone and his colleague Kyaw Soo Oe were released. 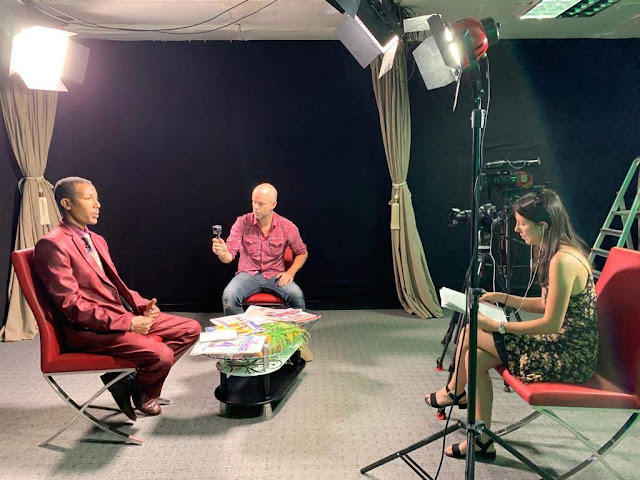 When I arrived in the country, the Ethiopians I met were so thrilled about the new political situation that for a moment I thought that they were overlooking the gaps that still had to be filled, but I was wrong. The people I met are attentive critical thinkers. Between exploring the city, tasting Tej and seeing amazing dancers at the restaurant - Yod Abyssinia, I also had the chance to meet the students and the head of the university of journalism at the Addis Ababa University. They are all very aware about what needs to be done and how journalism could blossom in the country: students recognise that access to state owned information and unemployment are still challenging issues; Amanuel Abdissa, of the school of journalism, told me that a quantitative growth of media has taken place versus a qualitative one and that investigative journalism is still hard to do; blogger Befekadu Hailu, who was jailed four times, told me that a new law passed by the Parliament will decrease income of broadcasters by 45% and that the new government instituted an Advisory Council to reform the justice system and look at repressive laws that are still practiced. 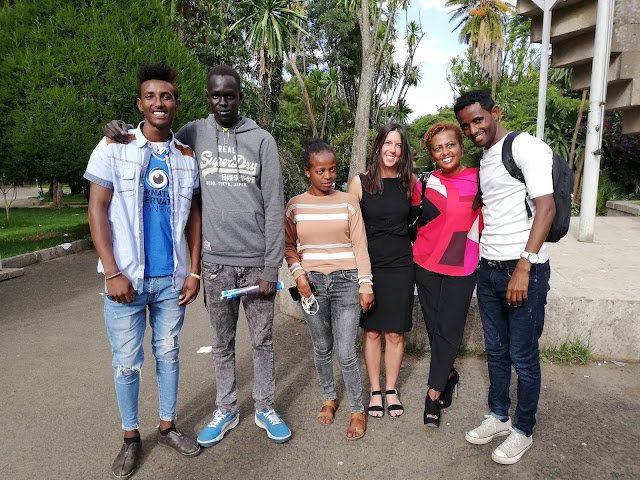 After seeing how Ethiopians and the diaspora like EILCO are trying to create change, I would like to do some voluntary work and be involved in journalism training projects.

REPORTING ON THE DROUGHT CRISIS IN THE TIGRAY REGION 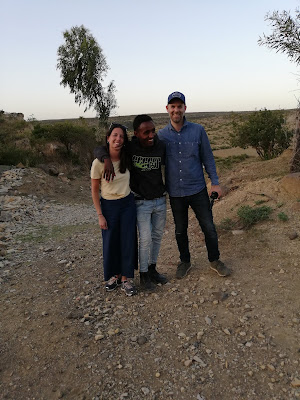 I didn’t just have the opportunity to report in the fourth largest city in Africa, Addis Ababa, but I was able to put myself to the test in a different environment. We travelled with Oxfam to the north of the country, Mekele, to cover how the drought crisis and climate change are impacting the lives of small communities there. When crossing the lands of the north of Ethiopia in an off-road vehicle, people and children on the streets were looking at us astonished. It was probably one of the first times that they saw white people. “Faringi, Faringi”, “foreigner, foreigner”, children shouted as watchmen whenever we got out of the car, then asking us to donate some pens.

In the Tigray region, Oxfam launched a project dedicated to landless youth and women to give them a good life alternative: beekeeping. This business perfectly fits into the very arid landscape they live in. There, cattle don’t have any grass to munch. Moreover, Ethiopia is famous for its special white honey, so beekeeping is definitely a good opportunity for them. I was struck, not just by the change this project brought to people’s quality of life, but also by how it empowered them and positively influenced the idea of themselves.

Teferi Kassa, a 22-year-old man, is very proud of himself today. He tried many times to immigrate illegally to Saudi Arabia to escape the hard life of his village. In the end, he decided to stay in Ethiopia as Oxfam trained him to become a beekeeper. He now manages many bee colonies and sells his delicious white honey to the local market. With the money he has earned, he bought a pool that he rents to this village. He then invests the money back into his beekeeping business.

In his small village, everybody now sees him as a successful entrepreneur. He now feels fulfilled, but others like him didn’t have the same chance. 15 young men from the same district escaped the warm land of Africa and drowned trying to find hope in Europe. My country, Italy, is witnessing this humanitarian crisis. After meeting young people there, its new stance on migration makes me question even more about the role of ‘bridge counties’ like mine and about how EU countries need to work together to face this issue. Just this week The Economist dedicated a lot of space to the bond climate-migration stating that “Moving is a rational way to adapt to a changing environment”.

However, when I met the second beekeeper and her husband, I realized that they didn’t understand why their two sons and daughters went illegally to Saudi Arabia. It was moving to talk to them about how new generations’ goals and ideas have changed, compared to the values and culture of elders. On the wall of their house, a poster written in Tigrigna says: “It’s only when you are far away from each other that you really miss someone”.

Bekele Woyecha
I was born and raised in Addis Ababa, Ethiopia; a country dubbed to be the cradle of mankind. I live in London, one of the greatest and cosmopolitan cities in the world. In love with this amazing city of ours. I also have seen beautiful cities in Africa, Europe and North America. Thanking God for these great experiences in life. Professional wise, I enjoy my Community Organising job in UK. This rewarding job brings me in touch with people from across the globe who relentlessly work hard to bring the kingdom of heaven on earth. People ready to change the world from ‘as it is’ to ‘as it should be’. I am concerned about the current refugee crisis. Many people across the world are persecuted for their religion, race, political belief, sexual orientation and other reasons. It is disheartening to see fellow humans denied the right to a decent life. I hate it when some abuse others using their POWER. I also hate it when leaders cling onto power by force. Hence defending human rights is more than important for me. It is down to my generation to identify, train and coach the next generation of leaders and empower them with hope and love. The next generation deserves better.
Newer Post Older Post Home

Former colleagues and friends of Josephine Mukanjira, who died from Covid19 complications in Mid-April, pay tributes to a stupendous ... 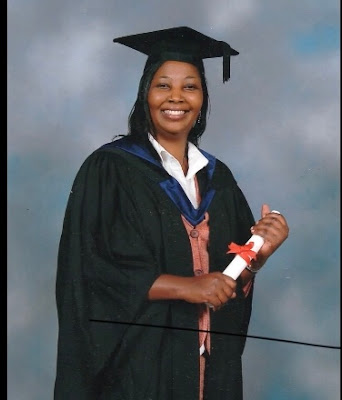