Ganging up on Ethiopia, a proud black nation 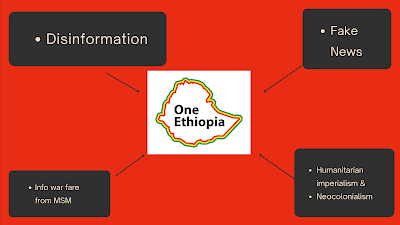 Many of us strongly feel there is a coordinated attack on our country Ethiopia by the Mainstream media and western political apparatus to portray Ethiopia as if it is full of crises and a no-go-zone. That is not what Ethiopia is. Most of Ethiopia is peaceful. People are living their daily lives without any challenges. It is business as usual in most parts of Ethiopia.

There is indeed a conflict in the North of Ethiopia due to the belligerence act of the Tigray People's Liberation Front (Sanctioned by the Ethiopian Parliament as a terrorist organisation). This organisation has extended its belligerence acts and invaded the Amhara and Afar regions. It has massacred 1000s of innocent civilians. Destroyed livelihoods. Displaced more than a million people. Most of us feel the pain on a daily basis. We still suffer from the trauma of this organisation’s cruelty when it was in power. Many of us in the diaspora left Ethiopia because of this organisation, as it did not tolerate dissenting voices when it was in power. In fact it does not tolerate dissenting voices even today.

Today, Ethiopians feel dismayed; Ethiopians feel frustrated by the false narratives of the Mainstream media which are not representatives of the situations in Ethiopia. And those of us who live in the western world feel very sad to see totally biased reports on Mainstream media outlets including the BBC and The Telegraph. To see intentional misinterpretations and mistranslations of the Prime Minister’s speeches and writings, is even frustrating and disheartening. To see Mainstream media and western political forces ganging up to pressurise a proud black nation is even heart-breaking. And to see this in the era of black lives matter movement is extremely saddening. One would expect to see an honest and ethical translation with accountability when one sees articles on Mainstream media. That is not what has been happening. We have seen photoshoped pictures used by the Mainstream media. We have seen photos of different stories and times used totally for unrelated stories. We have seen those who have no clue at all about Ethiopia being given platforms to speak about Ethiopia – more catholic than the Pope himself? The list is endless.

We just question if there is ever true journalism at all? Most of us have lost our confidence in the Mainstream media and have resorted to citizen journalism using our own means.

The situation in Ethiopia is affecting every Ethiopian for a number of reasons. Those of us in the diaspora see our home country portrayed as a war zone. As if it was a hell on earth. Mainstream Media carrying totally flawed and biased articles. Heart-breaking to see the Mainstream media ganging up on Ethiopia. Very depressing. Hence those who support the law enforcement by the federal government of Ethiopia demand equal treatment of the media.

In the meantime, we use social media to expose the hypocrisy of the Mainstream Media using Social media.

I am in #AddisAbaba and everything is normal. There's no need to panic about the #CNNFakeNews and attempts by some western governments and media to create public panic and concerted regime change plan in #Ethiopia. We must meet this moment of national and global challenges. pic.twitter.com/T4S2SPupWn

Despite attempts by the western political apparatus and Mainstream Media to discourage foreigners and nagging them to leave Ethiopia, those in Ethiopia have a different story.

We hate the fake News spread by @CNN#NoMore

‘It is all politics. Every thing is safe here’👇🏾