Hole in the wall

Mama had a problem

Which is of financial
Took up the phone to make the call
London or New York should I call
Isn’t London cheaper to call?
Asked the old woman herself
As she believes to know western life
And remembers how money is pulled from the hole
The hole deep in the wall
She still recalls
Putting the cards
Hiding fingers
Typing numbers
How could they put money in the wall


For every passing individual
Mom is thinking about the hole
And is now making the London call
Hello my son
How is your life?
How are the people around
The buses, the trains
And the one that goes underground
Is that supernatural or man made
Mom continued asking questions
When did they build those places
Where were we then in those times
She had questions with no answers
The young man who was worried
Asked his mom why she had called
Mom was so quick to remember
To ask her son what to send her
I need only some money son
Which I should get very soon
The son answered politely
Telling mama there was no money
Explaining the slow down in economy
That made mama so furious
As she knows there is a hole so generous.
Hole in the wall so generous.
So generous for bye passers. 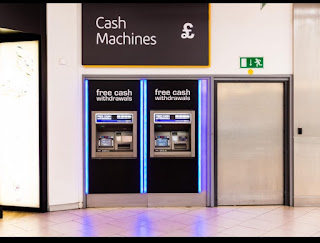